3 years ago I met a very interesting young lady at a Jonathan Field clinic who I instantly took a liking to. And although it was easy to tell she was smart, educated and confident, it was her open friendliness and down to earth attitude that really made me like her.

But nowhere in our brief time together did I see this coming.

She has signed up for the 2016 Mongol Derby. In fact she is the only Canadian in the competition.

And this isn’t just any competition. This is the world’s longest horse race. Only 44 competitors have signed up. For good reason. Most of us would never make it.

Take a look at this site about the race. http://www.theadventurists.com/mongol-derby

Here are the brave (or crazy) people who have signed up for 2016 starting with the only Canadian Entry:

“Reserved, boring and aging” corporate lawyer in need of a life altering experience with a purpose as raising awareness for her five-year old nephew Chase who has endured severe epilepsy since he was born. Charity is BC Epilepsy Society. 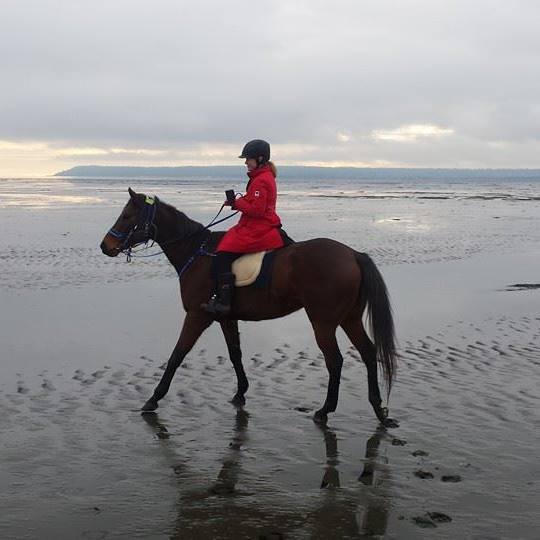 Pre-medical nursing and midwifery student. Aspiring Neonatal Cardiothoracic Surgeon and horse enthusiast who loves to travel the world and wants her own hardy adventure: Mongol Derby, here she comes!

Owner, Chief Pilot and Chief Flight Instructor of Becker Helicopters is taking time off with his daughter Chase to ride a horse across Mongolia. Enthusiastic about raising money for his charities of choice, Cherish, Midwife Vision and Cool Earth, Mike is putting to his mind to the task and get his 53-year-old bum onto a tiny Mongolian pony! What is he thinking?!

World class endurance rider, specialises in natural horsemanship and trains wild horses for a living. Lives and works on a cattle station in the outback.

Grew up on a cattle station in Queensland where he learnt to ride competing in rodeo, show-jumping and eventing. Now runs cattle. Is doing the Derby to give himself a physical and mental challenge and raise money for the Royal Flying Doctor Service and The Heart.

Born in outback Australia to a large and very happy family of seven children and rode from the time she could walk.  Being true to her Australian roots, she put her swag on my back and travelled the world leading to an executive career in Silicon Valley.  Wants to use the ‘journey’ “to help save horses from slaughter, and the ancestors of the horses I dearly love today – the Mongolian ponies will guide me on that journey.”

“Not all those who wander are lost; the old that is strong does not wither” (J.R.R Tolkien)

Grew up on a sheep and cattle farm, has ridden since he could walk and used to riding pretty much anything, especially the crazy ones! Rural and remote doctor and outdoor specialist. Has walked with gorillas, trekked with grizzlies and rode through jungles so should find the Derby a walk in the park!

Danish law student (and show-jumper) who made it halfway through the Mongol Derby in 2014, and is returning determined to cross the finish line! Go girl!

German veterinarian with her own practice for small animals and (some) horses in Lapland/Northern Sweden. Loves activities that she can do as a team with animals such as sled dogs (she owns 40 and enjoys to train and travel with them but is mostly passionate about taking care of them as a veterinarian)and horses. Likes speed and would have loved to become an amateur jockey. Also always had the dream to once do a long trip with horses. “The Mongol Derby seems to combine all of this.”

Entrepreneur and manager in the loyalty-travel-tech space. His tribe include his wife, son, daughter, two dogs and three mares. His passions: nature and adventure. Why do the MD16? Because he’s trying to be true to his all-time favourite quote: “If you’re not living on the edge, you’re using too much space.”

This supermom without a cape stops at nothing to pursue a fulfilled life. Passionate about art, horses and family she takes life by the balls and goes for it! This original dutch blonde has so much willpower even cancer won’t get to her!

Has been dreaming of the Derby since she first heard of it in 2010. Now she is participating. “It is never too late to live your dream!”

Event rider and student, currently studying extramurally towards a double degree in Business (Marketing) and Science (Psychology). A kiwi and a redhead (this alone should justify why she would be mad enough to contend the Mongol Derby). She is looking forward to experiencing the culture, people, land and the challenge. “It would be thrilling enough just to make it across the finish line.”

A paediatric nurse who loves the outdoors and has a reasonable horsey obsession. Raising money for CureKids.

Experienced desert endurance rider, competed for the UAE, loves being in the saddle for hours and hours – and always wanted to do this race.

Freelance publicist/ski instructor/lacrosse-playing eventer who has dreamt of riding in the Derby since reading; “Advice for riders signing up for the Derby? Don’t.” Finishing in one piece and living a once in a lifetime experience are what she’s looking forward to most…

Works and lives in London now but grew up on a sheep farm. Heard about this from a friend and immediately fell in love with the idea and had to go. “It will be tough for sure and I have no idea whether I am up to it but there is only one way to find out.”

Professional dressage rider (“not that dressage will help much during the Derby!”). Sufferer of wanderlust. Rode before she could walk. Riding with Venetia Phillips

Hopefully will have just graduated from Kingston University. Eventer turned student who is fast regretting never doing the Duke of Edinburgh Award. Will be spotted riding in a duvet as is permanently cold.

Lives and works for a safari company in Kenya. Loves adventure, loves adrenalin, loves challenges – “looking forward to new landscapes and doing it from the back of a horse.”

Is so excited to be competing in the Mongol Derby. Has always wanted to experience Mongolia and there seems like no better way than this race! “This is as much of an amazing adventure as it is a soul-searching endeavour.”

After being struck by the famous steppe gastro lurgy in the 2014 Mongol Derby, for which he can’t quite forgive himself, Loden is returning to finish the job equipped with a few more antacids this time.

U.S. Marine Infantry Officer, advanced Stage-IV cancer survivor, former college football player for the University of Missouri, avid skydiver and hopeless romantic, with an insatiable appetite for anything that could be his own demise. “The dangerous yet beautiful thing about broken people is that they know they can survive.”

Grew up on a cattle ranch, taught to ride by a real life John Wayne and competed in western rodeo events. Travels every year doing just about everything and thinks the Mongol Derby will be the “perfect blend of challenge, elements, wild animals & speed.”

A country girl who grew up riding horses without a formal equine education. This race is her way of competing in the horse world; yet this adventure is “for me, a way to test my horsemanship and outdoor skills in the fabulous arena of Mongolia.”

They say everything’s bigger in Texas and that’s why this Texan’s lifelong mantra is, “Go big or go home.” Whether he’s competing at the National Reining Horse Association Futurity Finals, swinging his mallet on the polo field, breaking wild mustangs or leading fox hunts in the wild west, Kelly Hale is on top of his same when he’s on top of a horse. This lifelong equestrian recently pulled up his Texas roots and replanted in the wide-open spaces of Montana, the American state known for big sky views and ponies that roam free. Only Texas and Montana can contain this 100% red-blooded American cowboy. #halerider

Born & raised a New Mexico cowgirl, she’s been a ranch hand, barrel racer and team roper. When not riding, and sometimes winning, 100-mile endurance races, this nurse practitioner doctors cowboys at her bustling medical practice nestled against the Rocky Mountains.

Long time showjumper, rider of wayward horses from Texas to Colorado, Architect, and traveler with insatiable wanderlust. Aims to win, but only if it is in the cards while experiencing Mongolia, treating every horse fairly and raising money for the Mongolian Women’s Fund.

Madison started riding when she was six and never stopped. She is a hunter/jumper rider but her love for horses goes far beyond the show ring. Madison attends art school in San Francisco and when she isn’t in class or on a horse she’s typically exploring a new place, camera in hand.

Paediatric intensive care nurse and a graduate student in medical anthropology. When not working and writing her thesis she can be found eventing, doing ashtanga yoga, wandering, and drinking gin and tonics with thoughtful people as she tries to figure out how to be a good human in the world. Raising money for MSF.

Multi-disciplined rider and outdoors girl who has tried her hand at most things, including martial arts.

Adrenaline junkie always up for an adventure. Riding to raise money for her own charity Rise-Up that runs orphanages in Nepal.

Riding with her friend Carin Östergren. Re-saddled from riding horse powers on a daily basis to drive them instead as a HGV driver. Had a gap year blowing up mountains as the first female Scandinavia within laddaservice.  Very passionate about horses and loves a good challenge.

We plan to post more about Heidi’s Adventure during the year. Stay tuned.

In honour of her nephew, Chase, who is only four years old and has lived with epilepsy since he was a baby, Heidi’s chosen charity is BC Epilepsy Society, through Canada Helps. She says her 1,000km endurance ride in Mongolia is short compared to Chase’s endurance fight.

15th August: Riders back to Ulaanbaatar

The hardy & semi-wild native horses of Mongolia reprise their traditional role as the legs and lungs of the adventure and the horse stations, or morin urtuus, will be manned by nomadic herding families as they traditionally were. The messengers themselves will be played by horsemen and adventurers from around the world all riding up to 160kms a day, navigating independently and changing horses at 40 kilometer intervals.

Cool Earth is once again the race’s official charity, although riders can also raise money for causes close to their saddles, and hearts. http://www.coolearth.org/adventurists

2 thoughts on “The Canadian in the Mongol Derby”