Shock-em was born and bred in Saskatchewan by Jerome Fischer and ended up being owned by Deerwood Farms of Calgary for the rest of his life.  He started his show career by winning the QHAA Halter futurities as a weanling, yearling and again as a two year old.  Later under the guidance of Morgan Lybbert, he went on to earn a Superior in Halter, Western Pleasure and Hunter Under Saddle plus an AQHA Championship.  This was an enviable show record for any horse in any era.

Shock-em’s first foals arrived in 1980.  Though small in numbers the quality was evident as they started winning Halter futurities across Western Canada.  By 1983 more good mares were being booked and in ’84 they started their domination of the halter and pleasure classes.  At the fall futurities that same year his get earned close to $12,000.00.

In 1985 eight weanlings were shown at halter futurities.  All eight won money, totaling over $5,000.00.  1985 also saw the first Canadian Nationals where Shock-em’s won a championship in halter and a reserve in reining, but it was in pleasure with Shocka Lou 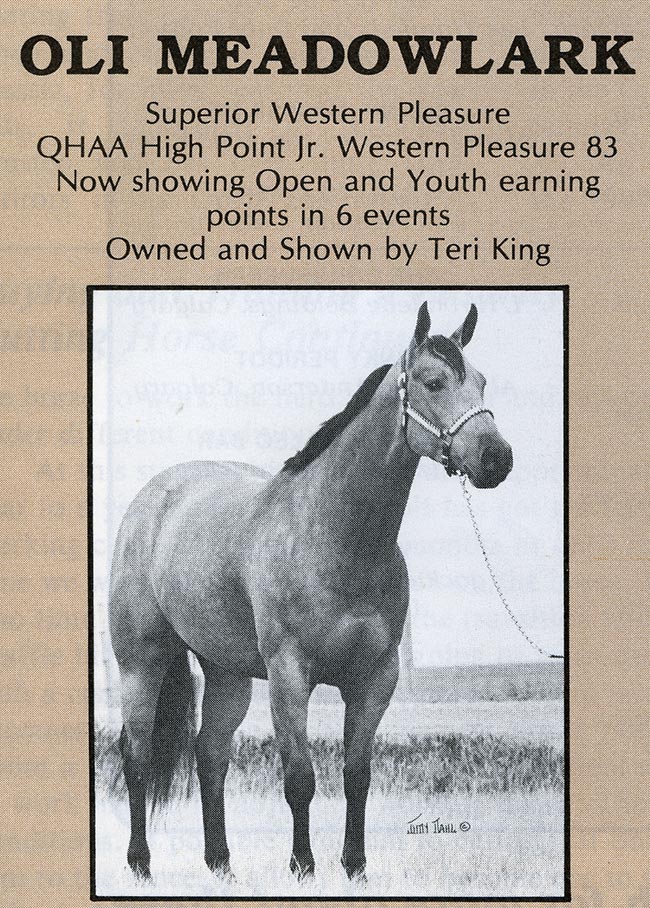 winning the Junior and Senior classes that proved him to be a top flight pleasure horse sire.  Two more Junior Pleasure Championships followed in ’86 and in ’88 and then in 1990, 3 colts placed in the top ten; one being Reserve Champion.

The eighties saw the judging of pleasure classes change from the bottom line to the top line, so a horse who carried his head a little high or nose not parallel to the ground was no longer successful regardless of how pretty or how smoothly he moved.   Horses that could move slow and collected while still keeping the frame of a level top and a straight face were winning.  This was the type of horse Shock-em was siring.  In the States, the studs that sired that body type; long horse, short back, were soaring in popularity, namely offspring of Zippo Pine Bar and Barpasser even though both horses had already been around for awhile.  It was also about the time people started to breed more for a winner than for a good horse, for example halter horses being bred to halter horses with no concern whether anyone would ever want to ride them.   Pleasure horses were also becoming more specialized and with some Shock-ems making waves in the States, some thought he should be sent across the line to stand to a larger book of strictly pleasure mares.  Tragedy struck, however, in the summer of 1987 when Shock-em broke his leg and had to be put down.

Every horse has critics, especially if he’s successful.  Early on people said they would not ride, which is an accusation hurled at virtually every stud, and time proved that not to be true.  People also said that most of his foals got the opportunity to go to the show ring (which is not the case for most studs) and that he got to breed the best mares in the country.  Both of which are true as Deerwood Farms had the best band of Halter and Pleasure mares at the time and maybe ever in Alberta and actively promoted his colts.  Shock-em however was more popular than most horses with his success for a couple of reasons.  First, you could not find better supporters of the Alberta Quarter Horse industry than the Hartley’s and second and more importantly, he stamped a real pretty look on his colts.  Regardless of what aspect of the business you were in, you could not help but like them.

Shock-em did not sire a son of his quality and with many of his daughters being sold all over the world the name does not appear in many ads anymore, which may lead some to believe he was more hype than substance.  However, with a sizable number of his foals being shown even years later without any hype, it proves that, his ability as a sire had no time limits.  Names like Shocks Candy Man, Shock n Roll, Cassino Shock, Shockalong Cassidy, 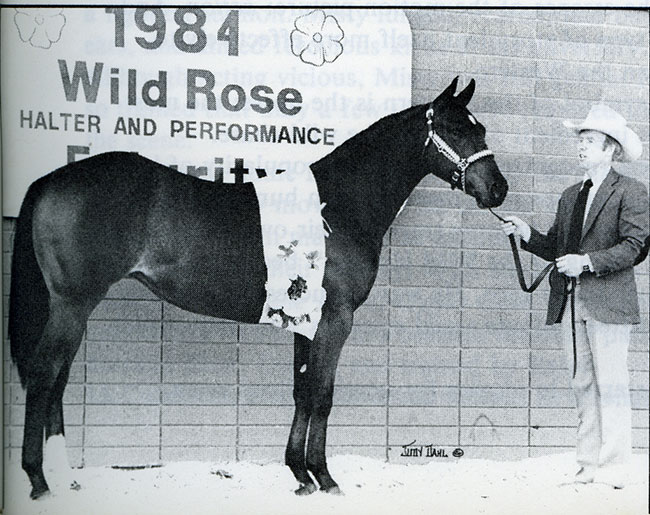 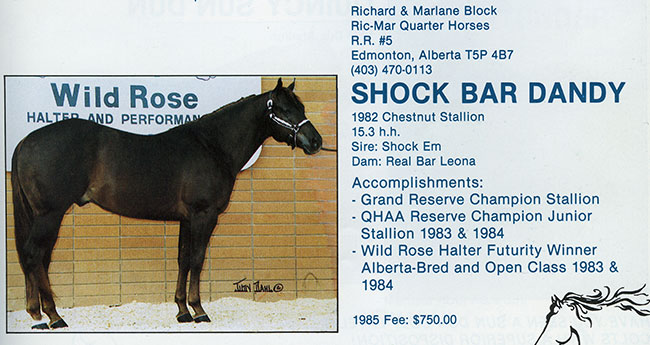 A good horse is a good horse whether he’s ten, twenty, or thirty years old.   A case in point is Shocka Sox.  In 1995, she was part of a group of mares advertised for sale by the Double K Ranch in Texas, owners of World Champion Doc O Mos.  The mares included daughters of Sonny Go Royal, Speedy Glow, Scotch Bar Time, Deck of Stars and other top bloodlines.   The mares showed a price ranging from $3500 – $5500.  I phoned the Double K thinking this mare by a horse they certainly didn’t know would be considerably less.   I was right that they didn’t know much about Shock-em, but they knew they had a good mare and the price was $12,500.00.  The foal she was carrying (Shocka Mos) was a Longe Line Futurity Winner in 1997.

All this accomplished from a horse that died when he was just 10 years old and only sired 129 foals. 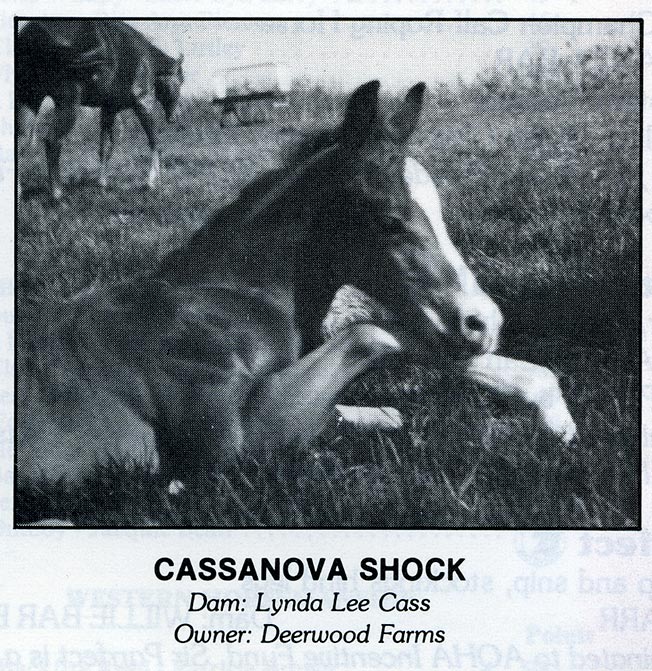 Produce of Dam (Becky Too Skip) and Shock Em 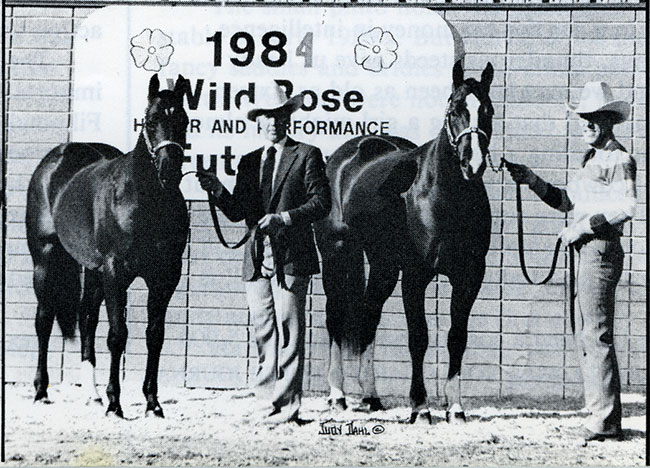 Shock A Doddle Do 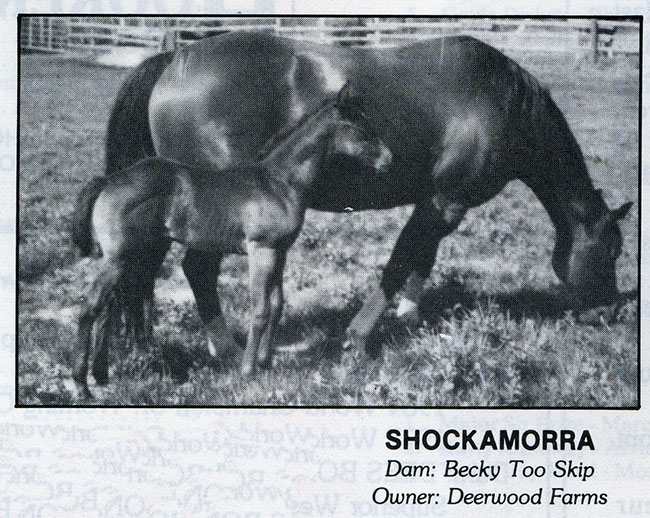 Shock Em Get of Sire 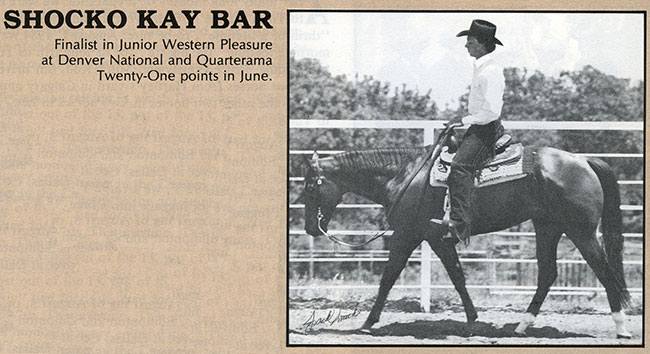 Do you have more information about Shock Em or his offspring? Photos? Just send them to us and we will add them to the article.

Comments? Stories? We would love to have you comment below if you remember this great horse or any of his offsping.

Do you Remember a Stallion you would like us to post about? Would you like to submit an article and photos about a stallion? (Must have stood in Canada and be deceased.) Just send us an email. dreamweaver@northernhorse.com

2 thoughts on “Stallions We Remember – Shock-Em”